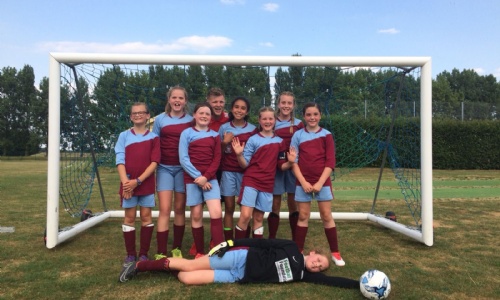 Crossdale Girls Football team competed in the Nottinghamshire County Cup Final last Thursday against Carnavon at Burton Joyce Football Club. This competition began back in September, when the Girls’ faced a first round tie away to Southwark Primary School in Basford with more than 800 children on role Crossdale knew they were in for a tough task, however Crossdale completed dominated throughout and won the game comfortably 10-0. In the next round Crossdale faced Ladybay Primary school at Ladybay in a closely encountered fixture with Crossdale scoring in the last minute of extra time 1-0 it finished. We were now through to the quarter finals and the girls’ were starting to believe having played some fabulous football in previous rounds of the competition this could really be our year… due to schools not fulfilling fixtures within time, Crossdale received a bye in to the semi-finals and met a very strong Fernwood side which was a very close encounter in which Crossdale won 1-0 and progressed through to the county cup final. In the final we met Carnavon and the girls’ competed tremendously against a very challenging side losing 2-0, but as a school we could not be any prouder of what the girls’ have accomplished this year. The team spirit, commitment and dedication all year has been fantastic all year round and Crossdale deserved to be county finalists.

Keep up the good work Girls’ and please hold your heads high!!!

Well done on an outstanding year :)